The theme for the Aspen Instant Runoff Election is voter confusion, mis-marked ballots, spoiled ballots, security measures ignored including some ballot boxes not sealed. Some voters frankly disliked the system, although others did like it. Voters did not understand how the election results were tallied , so how can they have confidence in the results? If the objective of an election process is to discern the will of the voters, then that process must be the simplest, most transparent and most enfranchising method for all voters. That is not IRV.

ASPEN — Aspen chose a mayor and two City Council members Tuesday in an election that left plenty of voters confused at the polls and equally mystified as the ballots were tallied in televised proceedings late into the evening.The city’s first use of instant runoff voting, which eliminated the need for a June runoff election, got mixed reviews at the polls. And the whirlwind runoffs after three hours of tallying votes left plenty of observers at a loss to explain exactly how the results were tabulated... 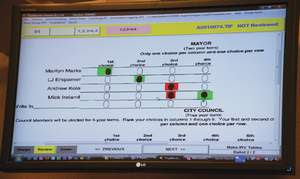 Aspen's first use of instant runoff voting for Tuesday's election featured a display of ballots on a screen at City Hall as they were scanned by the system. Only the first and second choices on this ballot were counted; it was invalidated in the third round of runoff voting because the voter ranked two different candidates as their third choice.
...Marks, who raised a number of concerns with instant runoff voting, and said the city’s test of the system on Monday was inadequate, said early in the evening that she was unsure if she’d challenge the new system.“Even if I win, I might still challenge it — it’s so messed up,” she said.
Voters apparently found the runoff ballots — which asked them to rank the four mayoral candidates and nine council candidates in order of preference — confusing. There were 168 spoiled ballots Tuesday; two is typical, said City Clerk Kathryn Koch.
Voters exiting Aspen’s Precinct 1 polling place Tuesday afternoon voiced decidedly mixed views on their first experience with instant runoff voting, or IRV. Some called the method confusing and others objected to a process that encouraged them to vote for candidates they didn’t actually want to win.
To ensure their ballot counted with each round of a runoff, voters were better off ranking all of the candidates rather than just those they hoped would prevail. Some mistakenly believed they were required to rank all of the candidates.
...Election judge Cindy Christensen reported plenty of miscues, including voters who forgot to cast a vote on the Aspen Art Museum question, placed at the bottom of the one-page ballot, apparently because they got caught up in ranking up to nine City Council candidates. Others gave both of their top picks for the council a No. 1 ranking, which invalidated the ballot.

“We’ve had quite a few spoiled ballots,” she said. Voters had up to three tries to fill out a ballot the scanning machine would accept. No one had required all three attempts by late afternoon, though, getting it right on the second try — usually after the first ballot was rejected because a voter ranked both of their top council choices as No. 1 picks instead of ranking one first and one second.

“I hate it. It’s very confusing,” said one voter emerging from Precinct 1 who declined to cast runoff votes. Instead, she voted for one mayoral candidate and her two choices for the two open council seats.

Others did the same, squandering their say in the runoff, should their top picks fail to win a seat.

Mark Lee said he voted for just one mayoral candidate and two council candidates, though he prefers instant runoff voting to returning to the polls in June for a runoff election.

“I know who I want and I don’t like any of the others,” he said, explaining why he didn’t rank candidates beyond the minimum.

Here's more about the voter confusion, the costs, also one mayoral candidate hoping that "rules" were followed next time:

...Tuesday’s election generated increased attention because of a new election system that had voters rank their preferences for all 13 candidates so an instant runoff could be held.

While many voters were confused about how to fill out the ballot and how the results were tabulated, Koch said the election administrators, True Ballot Inc., who were contracted with the city for $7,500, plus additional costs, did a good job explaining how the system worked.

However, there are critics of the instant runoff voting method, like mayoral candidate Marilyn Marks. She questions whether all of the rules and procedures were followed to the letter of the law.

“I hope in the future we pay attention to our election laws a bit closer,” Marks said Wednesday.

The United States Census Bureau estimates that the city population was 5,804 in 2005
Founded as a mining camp in the Colorado Silver Boom and named because of the abundance of aspen trees in the area, the city is now a ski resort and an upscale tourist center.

Its per capita income is among the highest in the U.S. In the late 20th century the average home price reached approximately $6 million and the city developed as an off-beat haven for celebrities, attracting such people as John Denver (who wrote several folk songs about the town, including "Aspenglow", and "Starwood in Aspen") and Hunter S. Thompson.