There's an election virus going around, its called Instant Runoff Voting. Brad Friedman, nationally known election issues blogger has a major posting up Instant Runoff Voting, Internet Voting, and Vote by Mail. Some of us have been fighting our lonely little fights in our own states, but now we are not alone, we have the Paul Revere of e-voting with us:

...Gautum Dutta, of the Democratic-leaning Asian American Action Fund blog notes a recent L.A. County Board of Supervisors meeting which "discussed a study on the cost of special elections and Instant Runoff Voting (IRV)" ...

While speaking to the Board of Supervisors, RegistrarRecorder/County Clerk Dean Logan testified how low voter turnout and high costs have plagued our special elections. ...If IRV had been used instead of special runoff elections, taxpayers could have saved up to $3.6 million.

Note to Messrs. Dutta and Logan: Taxpayers could save even more money if we simply allow you two to just decide for us who gets elected!

As Logan, chief election official of the nation's largest voting jurisdiction (larger than 43 states combined) has had more than enough problems with the current voting system which can't even add one plus one plus one accurately, such that it is virtually impossible for anybody to verify the accuracy of results, the last thing this county needs is to complicate the math even further by confusing matters with IRV's complicate scheme of ranked choice voting where voters are asked to select a first and second place choices, etc.


For that matter, unless, and until, we can simplify our election procedures such that any and all citizens are able to oversee and verify the accuracy of their election results, no jurisdiction in this country should employ schemes like IRV, no matter how well-meaning supporters of it may be in hoping to allow a broader range of candidates and parties to have a shot at winning an election....
more at the link - including Aspen's recent IRV meltdown.


Please post a big thank you to Brad Friedman over at the comments section of his blog for covering this important issue. DREs and paperless voting aren't the only risky election schemes.There's a new "bad idea for election reform" born every day. Lets not be caught by surprise. IRV is another distraction from serious election integrity work. Please forward this blog to others concerned with election protection. 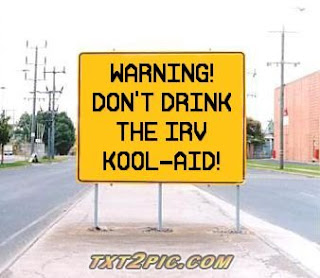