New York, your Trojan Horse is at the gates - instant runoff voting

New York's election pilots of optical scanners are being used as a trojan horse for instant runoff voting. Last week the NY Senate Elections Committee heard several suggestions to eliminate the costs of runoff elections. One suggestion is to just eliminate runoffs and have winner take all elections. IRV advocates lobbyied for instant runoff voting "pilots", which are really just a way to get the camels nose in the tent. The claim is that New York should have no problem at all implementing IRV with new optical scan machines.

IRV pilots were used in North Carolina in an effort to spread IRV all through the state. The effort failed. Only one town was willing to use IRV this year, and that town did not count or use the 2nd or 3rd choice votes in this November election. Worse, the pilots were run inconsistently with NC election law and IRV supporters publicly endorsed the central counting of votes, the only way IRV CAN be counted. 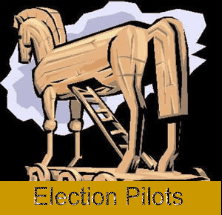 “After evaluating the 2009 election in New York it is clear that we are on the right track to ensuring that every New Yorker receives a voice in the electoral process,” said Senator Addabbo. “I am hopeful that optical scan voting machines will ensure that every vote is counted on Election Day, and while great improvements have also been made in the areas of poll site accessibility and efforts to end voter suppression and intimidation, I also believe we can do better. Legislation introduced today would eliminate the outdated practice of primary runoff voting, saving taxpayers millions of dollars in these difficult economic times.”

“Runoffs are extremely costly and only a tiny fraction of voters participate," said Senator Krueger. "This past election cycle in New York City we had a runoff for Comptroller and Public Advocate in which only eight percent of the registered Democrat voters went to the polls but the City spent over 15 million dollars. If my legislation is passed New York would be able to use an instant runoff system where if someone doesn't garner a majority of the vote, the second choice votes will be selected at the same time on the same day. This would let everyone know the outcome of the 'instant runoff’ that day, saving taxpayers millions of dollars and ensuring that candidates with the maximum turnout of primary voters are elected. Since the State and City are moving to paper ballots with optical scanners as the new voting machine technology, it will not be complicated to change to this multiple choice voting system."

FairVote Partnership with Internet Voting Company EveryoneCounts erased after post to election integrity group
The page, before scrubbed, said:"Fairvote in partnership with Everyone Counts and The Center for Voting and Democracy (Fairvote) have entered into an agreement to promote proportional representation in the United States."

Radio interview on lawsuit to get Instant runoff voting in St Paul overturned
"If people would have known how its (IRV) not going to be used .. there are a lot of people who won't use the 2nd choices.. and what happens to them.. people who don't make a second choices... they don't actually get a choice in the final election
....
it does cause you harm if there's a runoff and your candidate is not one of the top two....Folks in my party will start to see that there wasn't really any debate in Minneapolis... we had more debate in St Paul with the old system than they had with the new system..they deliberately, intentionally and with as much malice as possible claimed false endorsements and mailed that stuff out to try and save the election.
....
if nothing else, its worth it just to me, as someone whose ran campaigns... to stand up to people who deliberately lie to the public..."

St Paul: Judge rules instant-runoff campaign should go on trial
Nov 8, 2009. A judge ruled that there was probable cause that the St Paul Better Ballots Campaign broke the law when sending out endorsement claims in a campaign mailer promoting instant runoff voting.

Instant runoff voting claims in St Paul are phony says 2nd campaign complaint
November 2, 2009
“I was surprised that Santa Claus and Jesus Christ weren’t on the list,” Repke says. “You can’t be more deceptive than to claim the endorsement of the President of the United States when you don’t have it. I’m just flabbergasted.”Repke is particularly peeved that the pro-IRV group is claiming DFL support. He notes that at the St. Paul DFL convention in March, a resolution to support the ballot measure was explicitly voted down by party activists. And in a town dominated by Democrats, the party’s purported backing could carry weight with voters
......
“Karl Rove wouldn’t pull crap like this,” he says. “I’ve never seen a more evil campaign than this and I’ve done politics for 30-some odd years in this town.” 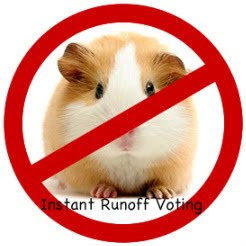 Sign up to receive updates by email here:
http://feedburner.google.com/fb/a/mailverifyuri=ProtectUsElections-StopInstantRunoffVoting&loc=en_US
at 10:35 PM No comments: