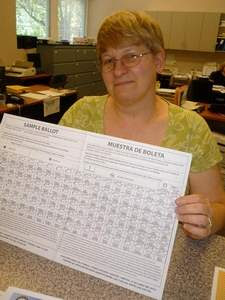 Wouldn't bullet voting have been simpler? Did Luis Morano win because of Cumulative voting or the $100-per-voter education
A judge ordered Port Chester New York to change their election method to cumulative voting in an effort to level the playing field for Hispanic candidates.
The judge said Port Chester's at large system was thwarting Latino candidates from winning elections. Instant runoff voting had been another option, but Port Chester's preference was cumulative voting.
FairVote was involved consulting with with Port Chester on this new election method. FairVote also was involved in voter survey, posing a conflict of interest since FV's mission is to spread these voting methods.

Although the village of about 30,000 residents is nearly half Hispanic, no Latino had ever been elected to any of the six trustee seats, which until now were chosen in a conventional at-large election. Most voters were white, and white candidates always won.

Federal Judge Stephen Robinson said that violated the Voting Rights Act, and he approved a remedy suggested by village officials: a system called cumulative voting, in which residents get six votes each to apportion as they wish among the candidates. He rejected a government proposal to break the village into six districts, including one that took in heavily Hispanic areas.

It's the first time any municipality in New York has used cumulative voting, said Amy Ngai, a director at FairVote, a nonprofit election research and reform group that has been hired to consult. The system is used to elect the school board in Amarillo, Texas, the county commission in Chilton County, Ala., and the City Council in Peoria, Ill.

The judge also ordered Port Chester to implement in-person early voting, allowing residents to show up on any of five days to cast ballots. That, too, is a first in New York, Ngai said

At least it is additive and they were able to use lever machines to vote on it. No funky algorithm. It was expensive, at $100 per voter in education.

PORT CHESTER, N.Y. -- The court-ordered election that allowed residents of one New York town to flip the lever six times for one candidate - and produced a Hispanic winner - could expand to other towns where minorities complain their voices aren't being heard....

"We put so much emphasis on education - we may have spent $100 a voter - because we knew it would be critical to success," said village spokesman Aldo Vitagliano

Seems to me it might be easier and cheaper if they just bullet voted. At least it is additive, even if it is confusing.
The Brennan Center for Justice has on the election and planned followup study:

On Tuesday, June 15, 2010, the Village of Port Chester, NY, elected its first Latino candidate to public office. With just over 10 percent of the vote, Luis Marino, a Peruvian-born custodial worker and long-time Port Chester resident, earned a seat on the Village’s six-member Board of Trustees.
Mr. Marino’s victory represents the culmination of a four-year struggle to change the face—as well as the structure—of local elections in Port Chester. The effort began in 2006 when the Department of Justice filed suit against the Village under Section 2 of the Voting Rights Act of 1965, alleging that Port Chester’s at-large system for electing its Board of Trustees marginalized Latino citizens by diluting their voting strength in Village elections. Although Latinos make up nearly half of the Village population, no Latino had ever been elected to local office.
In 2008, a federal judge agreed with the Justice Department and ordered the Village to replace its existing election system with another, less discriminatory process for electing its Board of Trustees.

The court considered a variety of proposed remedies for Port Chester’s voting rights violation. The Department of Justice argued that Port Chester should be divided into districts with individual representatives—the most common remedy for discriminatory at-large election systems. Such a system would allow the Village to draw Latino-majority districts with the power to elect their preferred candidates.

As an alternative, the Brennan Center, which represented FairVote as amicus curiae, urged the court to consider an election system called “choice voting.” Under choice voting, voters rank candidates in descending order of preference. Candidates who receive high rankings from a sufficient number of minority voters can still gain representation on multi-member legislative districts even if white voters support other candidates.

Ultimately, however, the court selected Port Chester’s own proposed remedy: a system called “cumulative voting,” which the Brennan Center also endorsed. Under a cumulative voting system, voters can distribute their votes in whatever combination they choose. In Port Chester, for example, each voter had six votes to cast as they chose. They could cast all six for a single candidate or distribute their votes among a group of candidates. This system’s flexibility allows minority voters to pool their votes in order to elect their preferred candidates. The results from this week’s historic election—which also saw the election of the first African-American candidate to the Village Board—suggest that Port Chester’s minority voters may have done exactly that.

While the selection of Port Chester’s first elected minority Trustees certainly represents important progress for this New York suburb, in order to fully understand whether the new system was responsible for that progress we need more information about how minority voters actually voted. Cumulative voting can only empower minority voters if they understand the system. The federal judge that decided the Port Chester case seemed to recognize the importance of community education in his consent decree, which required the Village to undertake a major voter education effort—including mass mailings and public seminars—to teach voters about cumulative voting. Still, questions remain as to whether these efforts ultimately succeeded in giving voters a complete understanding of cumulative voting.

Fortunately, we may soon have this information. FairVote, in conjunction with Port Chester and the New York City Bar Association, organized volunteers to survey Village voters about their voting experiences as they exited the polls. Political scientists will evaluate the responses of these surveys to determine how well voters understood the new system.

We were among the volunteer surveyors stationed at Port Chester’s ten polling precincts on Election Day and had an opportunity to witness voters’ reactions to the new election system first-hand. As some news outlets anticipated, voters’ opinions on the new system ran the gamut, with some lauding cumulative voting for creating new opportunities and others denouncing the change as unnecessary.

But while voters displayed a variety of different attitudes towards the new voting system, one thing was apparent to us: Port Chester residents care deeply about their local elections. Many of the voters we met had clearly taken the time to reflect on the recent changes to their local democratic process. Our experience revealed that—contrary to certain media coverage depicting Village voters as merely pawns in a broader political struggle over race and voting rights—these voters saw the court-ordered exit surveys as a genuine opportunity to share their thoughts about their new election system. Some even viewed the survey as a chance to shape future elections, both in their Village and around the country.

In the end, we still have to wait for the survey results before we know whether the new Trustees were the preferred candidates of minority voters in Port Chester; however, with the increased diversity in Village government and improved turn-out among voters, last week’s election has already offered plenty to celebrate.

Visit this link to sign up for email updates:http://feedburner.google.com/fb/a/mailverify?uri=ProtectUsElections-StopInstantRunoffVoting&loc=en_US
at 11:45 PM No comments: Links to this post