Here's a letter to the editor about Aspen Colorado's recent instant runoff voting election. The writer wonders if instant runoff voting is truly good for the voters and if the tallying software has even more flaws than found so far. One flaw caused 28 votes to be miscounted in the final round. 28 votes doesn't sound like a lot unless you consider that sometimes an election is decided by even less than that number. Computerized vote counting is not as trustworthy as the average layperson assumes that it is.

Dear Editor: As a proponent of instant run-off voting I continuously made the point that any software needed to be rigorously tested to ensure that it was error-free on Election Day. Despite good faith reassurances from the city staff, if now becomes clear that such was not accomplished. The software used by Aspen was obviously code generated for Cambridge (and thus satisfying a different set of rules), ostensibly modified to fully meet our requirements.

Post-election hand counting and reconciliation to the software generated results have revealed one error. There may be more buried in the code and unknown until a data set of votes forces a deviation from the voting rules. We simply have no reason to be entirely confident that using this software the next election will flawless, as it should be.

Overarching any “mechanical” problems of the software is the need to pragmatically evaluate this experiment and determine if it is better as a means of choosing our elected officials. Is it superior to a traditional run-off with the top two mayoral candidates squaring off? In the case of a large field of council candidates is the elimination system that was used better than others (like single elimination), or are we better suited to halving the field and having a run-off?

In sum, Aspen’s first taste of IRV may have resulted in the correct end result, but it has left a bitter taste in the mouths of many. There is more to be done, and we should not wait until the next election looms over us, as was the case this year. 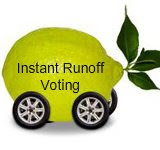